Buddhism and the Cosmos Daisaku Ikeda 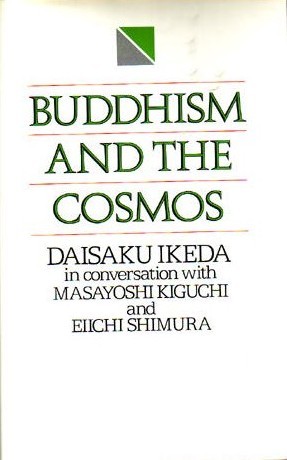 Daisaku Ikeda is a Buddhist philosopher, peacebuilder, educator, author and poet. He is the third president of the Soka Gakkai lay Buddhist organization and the founding president of the Soka Gakkai International (SGI), which is today one of the worlds largest and most diverse lay Buddhist organizations, promoting a philosophy of character development and social engagement for peace.Ikeda is the founder of the Soka (value-creation) schools, a nondenominational school system based on an ideal of fostering each students unique creative potential and cultivating an ethic of peace, social contribution and global consciousness.

The school system runs from kindergarten through graduate study and includes a university in Tokyo, Japan, and another in California, U.S.A.Ikeda is a staunch proponent of dialogue as the foundation of peace. Since the 1970s he has pursued dialogue with a wide range of individuals around the world in political, cultural, educational and academic fields. Over 50 of these have been published in book form, with people such as Mikhail Gorbachev, Elise Boulding, Joseph Rotblat and André Malraux. In furtherance of his vision of fostering dialogue and solidarity for peace, Ikeda has founded a number of independent, nonprofit research institutes that develop cross-cultural, interdisciplinary collaboration on diverse issues: the Boston Research Center for the 21st Century, the Toda Institute for Global Peace and Policy Research and the Institute of Oriental Philosophy.

The Min-On Concert Association and the Tokyo Fuji Art Museum promote mutual understanding and friendship between different national cultures through the arts.Ikeda is a prolific writer who has published more than 100 works, ranging from Buddhist philosophy to biographical essays, poetry, childrens stories and photographic collections.

Comments
Comments for "Buddhism and the Cosmos":